Buses in Cuba are called Guaguas. Even though the urban bus network is well developed the timings of the buses can sometimes be quite irregular and also there is usually no timetable information at the stops so it is highly recommended that you plan your routes and timings before you set out. A map of the bus routes can be found online here and at tourist information offices. Intercity tours start at the Viazul Bus Terminal in Nuevo Vedado and travel to Varadero, Trinidad, Santiago de Cuba and Baracoa. A ride in an air-conditioned coach will cost between 10 and 70 CUC.

Casa particular (Spanish for “private house”; plural casas particulares) is the phrase to use if you wish to stay in private accommodation or private homestays in Cuba. Your stay could be just for bed and breakfast or you could rent the premises for self catering full board. The locals usually shorten the term to simply casa.
(Image: Official symbol for Casa particulares in Cuba.)

The convertible peso (CUC$) – informally called a “cuc” or “chavito” – is one of two official currencies in Cuba (the other being the Cuban peso – CUP. It has been in limited use since 1994 and has been treated as the equivalent to the U.S. Dollar: its value is officially US$1). The exchange rate for the local currency is: 25 CUP = 1 CUC. Most goods and services will accept CUC only. 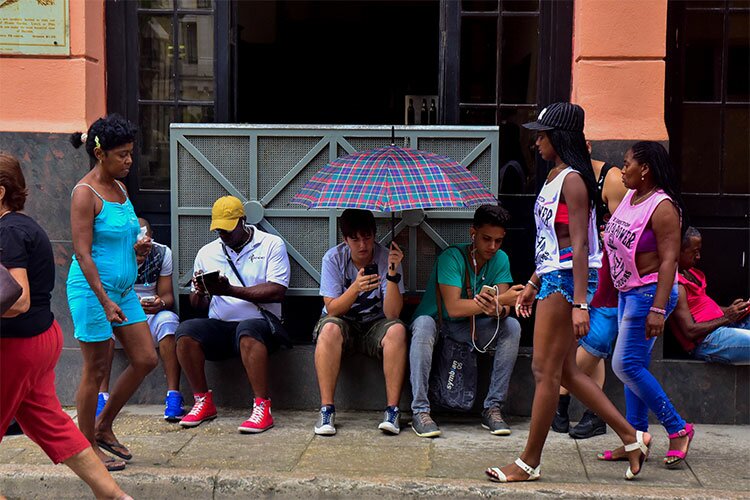 Most Cuban households have no internet access. WiFi access points are available in major hotels and, as a test phase, in some public places in Havana (see map) and currently costs 2 CUC per hour. Cards with access codes can be purchased directly at hotels or at the office of the telecommunications company (ETECSA) in the street Obispo, the famous shopping mile in Old Havana. There are also desktop computers available for internet use.

Cubans speak Spanish Cuban, or Cubañol, but anyone with a sufficient knowledge of Spanish should be able to communicate without any problems. English is spoken widely at most tourist facilities and you should find that most of the locals are increasingly interested in learning the English language and practising it.

A taxi is the easiest way to get around in Havana and the surrounding areas. There are official taxis (yellow cars with the label Cubataxi) and private cars that are approved as taxis (with a taxi sign on the roof). But just about anyone who owns a set of wheels in Havana would usually like to offer their services for transportation, simply place yourself on the road and thumb a lift! Please make sure that you ALWAYS negotiate any prices before the trip. The following are rough guides of costs for trips: Centro Havana to Cojimar – 5 CUC; Centro Havana to Vedado – 10 CUC; Centro Havana to the eastern beaches (Playas del Este) – 15 CUC; José Martí (Havana Airport) to Centro Havana – 20 CUC; Centro Havana to Varadero – 15 CUC.

Basically, a tip is already included in the bills of restaurants and bars as well as taxis but, because of the weaker financial situation of many of the local people, an additional obolus of around 10% is seen as adequate and fair.

New practical tips for travellers are constantly being added